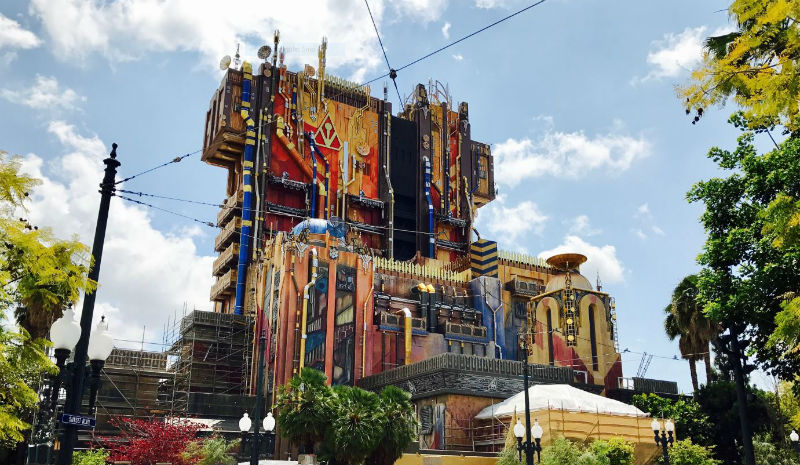 Guardians of the Galaxy – Mission: Breakout is the accelerated drop tower ride attraction at Disney California Adventure that is based on the Guardian of the Galaxy films from Marvel. It opened in May 2017 and was the first main Disney attraction within the US-based on characters from Marvel Comics. This attraction is a re-theme of the fan favorite Twilight Zone Tower of Terror. The ride depicts Rocket Raccoon breaking out the other Guardians from The Collector’s warehouse using your help. Below is a brief review of this amazingly fun and popular Disney attraction.

Guardians of the Galaxy – Mission: Breakout is a crowd favorite. As such, long queues are a guarantee. However, one can say that the queue is part of the experience. The area is packed with Easter eggs that any Marvel fan will enjoy, making the queue surprisingly fun and tolerable. Many objects and artifacts familiar to the MCU fans are displayed. They include an Ultron drone from Avengers, a Nova corp uniform, Terrigen crystals, Cosmo the dog and other unique items.

Many of Disney’s main attractions feature a specific narrative. Mission Breakout is no different with the story being hinted in the title. As a guest, you are touring Taneleer Tivan’s collection where he displays a new acquisition, the Guardians of Galaxy. Rocket Raccoon appears via animatronics and has escaped from his cell. He recruits you to attempt and free the rest of the guardians. He blows up the generator that power The Collector’s cells and chaos ensues. The story offers a nice back-story and set up for the ride. Even for those unfamiliar to the characters, the story is easily understandable.

In the Guardian of the Galaxy film series, music is a key component as a result of Star-Lord’s cassette tapes. Mission Breakout pays homage to this aspect as music features strongly on the ride. The creators of the attraction use music exceptionally well. The ride experience has six variations with separate visuals, separate patterns, and different songs. The 70s and 80s music is perfectly incorporated into the experience. The six songs include:

Justice for the Guardians of Galaxy Films

One of the best things about Mission Breakout is that it captured the irreverent vibe of the film series perfectly. The Vignettes that pop up throughout the ride as you go up and down feel more intense than the Tower and are wonderfully done. The ride managed to include the action and humor characterized by Star-Lord and Drax the Destroyer bits with periodic lines from Rocket. This is a big part of what made marvel fans love the film series.

Overall, Guardian of the Galaxy – Mission: Breakout is an extremely entertaining experience and more so if you are an MCU fan. While one may miss the Tower of Terror, Mission Breakout has held up well for over a year. It is highly recommendable and generally considered better than its predecessor. Guests must be 40″ or taller to ride, and for those who have limited accessibility, you must transfer from your wheelchair or Disney ECV to the ride.